Droitwich Golf Club has over forty (40) junior members aged between 7 and 18 with handicaps ranging from low single figures up to fifty-four (54). We are proud to have been awarded the England Golf’s “GolfMark” in 2007. It was successfully renewed in 2011 and was upgraded in 2016. GolfMark provides the basic foundation to the commitment we have in maintaining and improving Junior Golf in a safe environment at the club.

The Junior Section holds a series of competitions and events throughout the season, including monthly Medals and Stablefords (both 18 & 9 hole), Texas Scrambles, Girls Events, Fun Skill Challenges, Match Play Singles (SHIELD) & Pairs (HAMPTON SALVER) Knock Out’s and a JUNIOR DAY (including the JUNIOR CHAMPIONSHIP held in August).
There are also two major prestigious junior open competitions held every year, THE GIRLS OPEN on Thursday 14th April and THE BOYS OPEN on Wednesday 27th July. These events are very popular and attract a large number of junior golfers from both within Worcestershire and elsewhere in the country.
We also have a Junior Team that plays home and away matches in the Mercian Junior Golf League and other Club matches from March to October.
The Junior Section provides regular group coaching with our PGA Professional Staff at discounted rates for junior members and those juniors wishing to take up the game. Coaching with our professional staff can either be on a group basis or one to one.

We welcome new junior members and those juniors who wish to attend coaching sessions.

With the wet weather affecting the course conditions it has been a slow start to the junior season. The Junior Winter League was adversely affected. Matches versus the Friday Crew Team and the traditional annual encounter with the Captain’s Team were cancelled due to course closures.

The first 18 Hole Junior Stableford competition of the season took place on Saturday 26th Match with four entrants. The joint winners were Josh & Matty Griffiths with good scores of 40 pts each.

Grace Bowen became junior Captain and took part in the Joint Captain’s Shotgun Event on Saturday 9th April.
The following day there was a junior winner of the Family Foursomes. Harry Pittom with his grandfather David won with 36 pts.

On Sunday 24th April an 18 Hole & 9 Hole Stableford was held in bright but very windy conditions. There were Eight (8) entrants altogether. Elliot Jones won the 18 Hole Stableford with 32 pts and in the 9 Hole there were joint winners Ellie Blizzard and Lili Callegari (in her first competition after receiving a handicap) with 16 pts.

August *
Between the 2nd & 4th Lili Rose Hunt competed at the Faldo Series Midlands Championship at Kedleston Park, scored 75 + 75 +73 = 223, finished 15th overall and 3rd in the Girls U16 section.
The main junior event during the month at Droitwich was the Junior Championship on Thursday 12th with 8 entrants competing for 4 trophies. This was an 18 Hole Medal from the white and red tees. The eventual winners (gross scores) and Junior Champions were Lili Rose Hunt (Holm Cup) and Elliot Jones (A.E Presley Jones Trophy). The net winners were Kirsten Porte (Mary Waters Cup) and Finley Sabbato (Holm Trophy).

On Sunday 8th and Saturday 14th the junior team played home and away versus Gaudet Luce in the West Midlands Junior Golf League (WMJGL). The matches were closely contested but Droitwich lost both by the margin of 2 – 1. Whilst fielding strong teams on both occasions the number of shots being conceded to our opponents were just too many for our very low handicap players.

September*
In the Droitwich Ladies Club Championship held on Sunday 12th (36 Holes) Lauren managed to win a very close match against Kirsten winning 1 up.
The Harry Bennett Memorial Trophy (18 Hole Stableford) was held on Sunday 19th. In a closely fought competition it was Harry Pittom who eventually prevailed with 38 pts, winning his first major junior trophy. Eleanor Blizzard making her debut in an 18-hole junior competition came a close second with 37 pts.
A Junior Event/Texas Scramble was held on Saturday 25th with 7 juniors (6 Girls without handicaps) attending. This proved to be a very enjoyable event with some promising young golfers showing their golfing skills. Well done Phil for excellent coaching results.

Our last league match of the season was held on Sunday 26th versus Bromsgrove (A). With a slightly weakened team due to some absences the match finished a draw (1 ½ - 1 ½). This was a good result against the reigning WMJGL champions, although it must be said that we had opportunities to win the match outright.
Lili Rose won the Independent Schools Association’s Championship at Celtic Manor Resort (25th to 27th) with scores of 74 + 71 + 70 = 215 winning by 11 shots.
Tom Blizzard (aged 15) has been selected for the England Regional Midland Squad (2022) after shooting a gross 67 at Bromsgrove G.C and performing well in trials. Tom has had a very successful season reaching a handicap of + 1.9. He also won 3 junior opens in Worcestershire including our Boys Open.
Finally the Droitwich Ladies Scratch Team won the 1st Division of the Inter County Scratch League on count back from Whittington and Moor Hall. All four of our low handicap junior girls (Lili Rose, Grace, Kirsten & Lauren) played for the team throughout the season.

October
The Junior Singles Match Play Final between Lauren & Grace was played on Saturday 9th and I had the pleasure of refereeing and watching a fascinating match. Lauren led 3 up early on but Grace rallied on the back 9 to halve the match after 18 holes. Then followed 5 extra holes until Lauren finally won with a par. Either girl had opportunities to win this marathon contest.
Grace and Lili Rose took part in the R & A Girls U16 Amateur Championship at Enville, Staffordshire from the 21st to 23rd. Both girls qualified for the 3rd and final round. Grace with scores of 79 + 74 + 75 = 228 finished 22nd and Lili Rose with scores of 80 + 80 +72 = 232 finished in 27th position.
A Droitwich Junior Stableford held on Saturday 23rd with 5 entrants resulted in some very good scores. Finley Sabbato was 1st with 44 pts and Elliot finished 2nd with 41 pts.
The last junior competition of the season was an 18 Hole Stableford on Wednesday 27th with 6 entrants. The result would also decide the Junior Order of Merit. The scoring was excellent with Matty Griffiths and Finley Sabbato finishing with 47 pts followed by Josh Griffiths on 43 pts and Harry Pittom with 41pts. This meant that Matty and Finley were joint winners of the Order of Merit.

The Junior Pairs Final (Hampton Salver) was held on Wednesday 29th between Sonny Priestley and Harry Farmer versus Josh and Matty Griffiths. It was played in poor conditions with some heavy rain at times and the golf course was became slightly waterlogged. Nevertheless, it turned out to be another close encounter with both sides having opportunities to win. Finally, Harry Farmer played the last 3 holes really well and finished with a 3 net 2 at the 18th to secure victory by 1 hole.

November *
Lili Rose qualified for the European Junior Open Final which was held at the Alcaidesa Links and Heathland courses near Cadiz in Spain from the 21st to 25th. Some of the best U18 golfers in the UK and Europe were competing for this prestigious prize. Lili Rose opened strongly by scoring 71 + 76 and was lying in 5th position after 36 holes. However, a final round of 81 meant she eventually finished in 10th position.

The European Amateur Golf Rankings from major national and regional events has been updated and published. Lili Rose and Grace feature prominently in the England Girls U16 Section. Lili Rose finished the season in 5th and Grace was in 20th position. A fantastic achievement by both girls in 6-7 counting regional, national and international tournaments.

Kirsten Porte our Junior Captain won the 36 Hole Droitwich Ladies Redwood Trophy held on the 3rd July with gross scores of 81 + 70 = 151 and Lauren Sharp was 2nd with 79 + 80 = 159. Kirsten also won the best net. Kirsten and her Mother Theresa came 2nd in the R & A Coronation Foursomes Area Final held at Droitwich G.C on the 18th July.
The Faldo Series held its England South Girls Championship on the 12-14Th July at Welwyn Garden City and Brocket Hall G.C’s. Lili Rose Hunt shot a closing 68 gross to win the 54 Hole tournament by 3 shots. Her aggregate scores of 70 + 70 + 68 = 210 were a total of 9 under par. Lili Rose won both the U16s and U21s age sections. This is Lili Rose’s first national title won on Nick Faldo’s old course where John Bickerton achieved one of his many amateur successes.
On Saturday 17th July a Junior Medal was played with 4 entrants. Harry Farmer with a net 69 won his first junior competition with Matty Griffiths a close second on net 70. After 4 events in the Order of Merit, Matty Griffiths leads with Harry Pittom 2nd and Harry Farmer 3rd.
Lili Rose and Grace Bowen both participated in the England Girls Open Stroke Play Championship at Malton & Norton, Yorkshire from the 20 – 22nd July. Lili Rose qualified for the final day and eventually finished in 26th position in the U18s and 10th in the U16s with aggregate scores of 77 + 75 + 78 +78 = 308. Unfortunately, Grace with 78 + 81 = 159 did not qualify for the final 36 holes.
The Droitwich Boys Open was held on Thursday 22nd July. There were 28 entrants in the 18 Hole Medal and the 9 Hole Stableford from clubs in Worcestershire, Shropshire, Gloucestershire and Cheshire.
The winner of the gross prize (Simon Carter Memorial Trophy) was our own Tom Blizzard with 71. Winner of the net prize (Droitwich Spa Salver) was Teddy Fee from Gaudet Luce with a net 64. Both boys have qualified for the Justin Rose Telegraph Junior Championship. The winner of the 9 Hole Stableford in a tightly fought contest was Noah Slatter from Brickhampton Court, Gloucestershire with 20 pts.
The Worcestershire & Herefordshire County Girls Championship was held over 36 Holes at Moseley G.C on Friday 23rd July and all four (4) of our Droitwich girls participated. Olivia Williams, Churchill & Blakedown won the title with 71 + 72 = 143 with Lili Rose in 2nd place with 75 + 72 = 147. Grace, Kirsten & Lauren finished in 5th and joint 6th places.
Lili Rose & Grace competed in the England Girls U16’s Open Championship at Morecambe, Lancashire from the 27 – 29th July over 72 Holes of stroke play. The conditions were appalling at times with blustery strong winds and heavy rain showers. Both girls qualified comfortably for the final day (36 Holes).
Final 72 Hole scores were as follows:
Lili Rose 74 + 82 + 77 + 78 = 311 finishing in 10th position.
Grace 81 + 72 + 77 + 82 = 312 finishing in joint 12th position.
Junior Events – August
There is a very busy month ahead with the following local events and some national tournaments where are girls will be competing.
8th Junior Team vs Gaudet Luce (Home)
12th JUNIOR CHAMPIONSHIP
14th Junior Team vs Gaudet Luce (Away)
22nd HARRY BENNETT MEMORIAL TROPHY
29th Junior Team vs Worcester (Home)

Last Year’s Junior Match Play Singles K.O Final was played on Friday 4th June between Lili Rose Hunt and Sonny Priestley. There was some very high quality golf played during the match. Lili Rose was round in 73 Gross with 4 birdies but eventually lost 5 & 4. Sonny played some outstanding golf and also had 20 shots, which proved too difficult for Lili Rose. Both finalists have reduced their handicaps. Lili Rose has become the first lady/girl to have a scratch handicap at Droitwich G.C.

The following week on Saturday 12th June another 18 Hole Stableford was played with 6 entrants. Matty Griffiths was once again the winner with 46 pts just pipping Harry Farmer with 45 pts. Sonny Priestley was third with 39 pts.

After 3 events the 18 Hole Order of Merit is led by Matty Griffiths with Harry Pittom & Hayden Sarfo in 2nd and 3rd places.

Three of our junior girls were in the Worcestershire & Herefordshire (W & H) team that contested the Midlands South Region Ladies Championship at Northampton Golf Club from the 21st to the 23rd June. W & H finished 3rd out of 6 counties behind Buckinghamshire & Northamptonshire.

Our junior captain Kirsten Porte was unbeaten during the week winning 3 foursomes and a singles match. Lili Rose Hunt won 2, halved 1 and lost 1 match. Grace came up against some top opponents but managed 1 halved match. A very creditable performance by our 3 girls with 2 making their debut for the county in this prestige event. 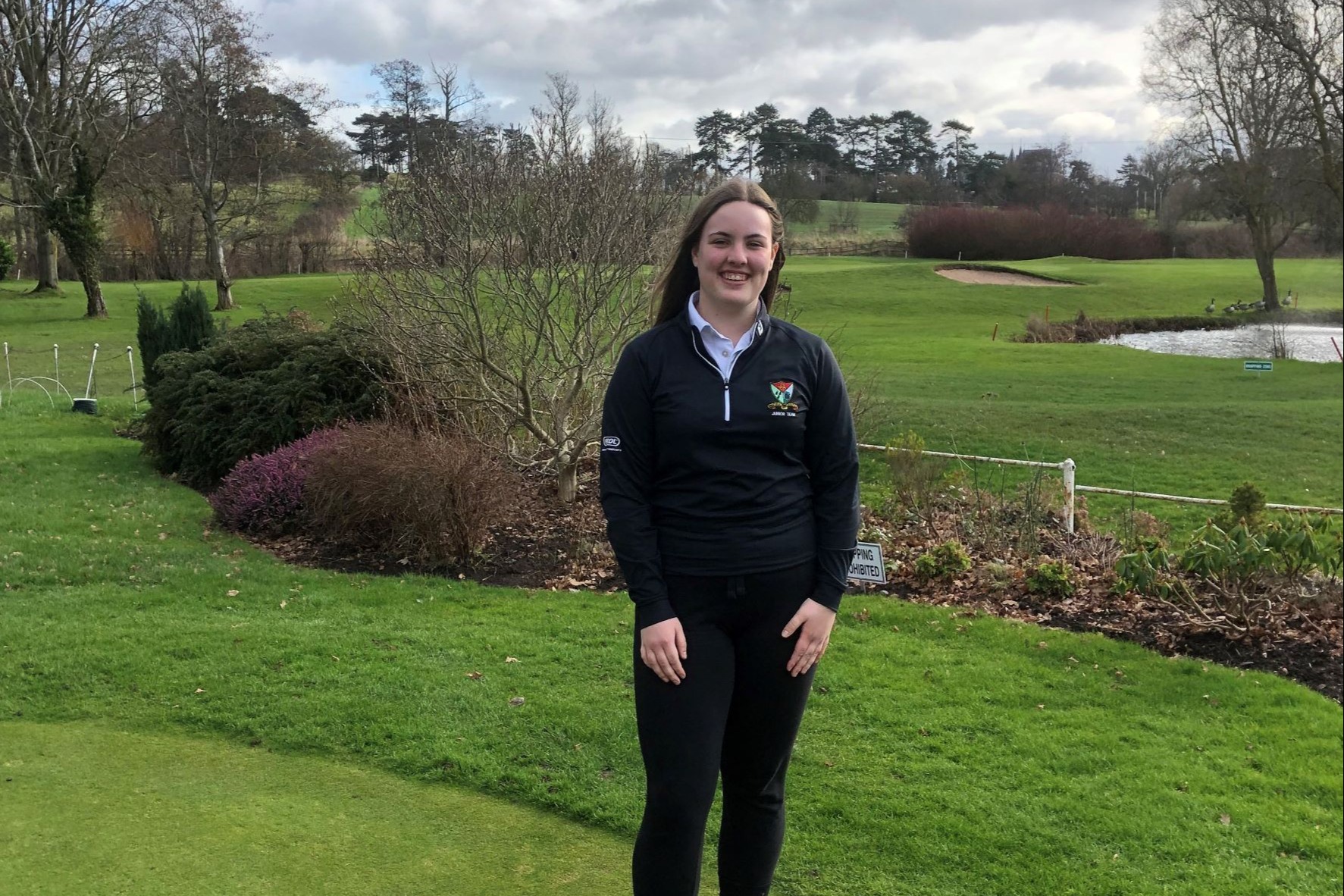